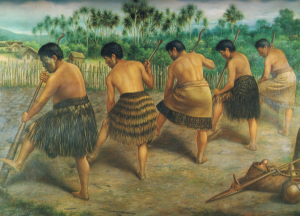 A Maori kumara planting scene of the past. Diggers using the Ko to prepare the ground. Painting by G.Lindauer

The Bay of Plenty is well known for its successful horticulture industry and Frank Sydenham’s commercial garden was just one of its many success stories.

Otumoetai horticulture history dates back to 1300AD with the arrival of Maori from Polynesia in ocean-going waka (canoes). It was in 1769 that Bay of Plenty was given its name, when Captain James Cook circumnavigated NZ. Cook was alluding to the region’s welcoming people and abundant resources. The Anglican schooner Herald was the first European ship to enter the Tauranga harbour in 1826 seeking food for the mission schools in the Bay of Islands.

In the 1830’s produce began to be traded in Otumoetai between the local Maori and the first missionaries and settlers.  The main Pa site for Tauranga was Otumoetai Pa, which stretched along the Matua foreshore and was where the first missionaries and traders set up their base. Originally dressed flax was traded for muskets, powder and other goods. One of the first Traders was John Lees Faulkner, who came here to obtain supplies of food for sale to whaling ships calling at the Bay of Islands. At this time local Maori cultivated kumara on this land and it was not long before they were growing potatoes, pumpkins, maize and wheat. 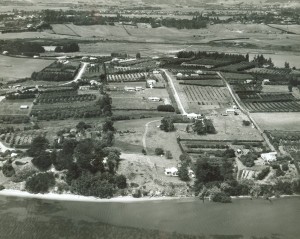 View towards Otumoetai from Tauranga harbour circa 1950

The land was said to be so rich that wheat was grown on it for eleven years in succession without manure. The amount of grain grown for export brought larger vessels servicing the Auckland market. There were reports of a 300 ton ship loading wheat off Otumoetai in the early 1850’s. By the 1920’s local farms were reported in the Bay of Plenty Times as being “the most prolific and best revenue yielders in the Bay”.

A couple of historic sites in the area worth a visit:

Otumoetai Pa Historic Reserve– 29 Levers Road. This property comprises the remnants of the Otumoetai Pa and carries historic significance for both Tangata Whenua and descendants of European settlers.

The Elms Mission House and Gardens– 15 Mission Street. The Elms historic house museum is the oldest European heritage site in the Bay of Plenty.

GET INVOLVED WITH THE PARK

*Being a community based development your support and donations are greatly appreciated.

*Be sure to check out the News+Events page for information on our coming volunteer workdays and other park events.

*Get outdoors and have fun with a group of friendly like minded people.

Big thanks to Bill Pepperell for donating some Cycads to the park. Cycad fossil records date back 280 million years ago and individual plants can live up to 1000 years. "The plants are so long lived they need to go where generations of people can enjoy them" - Bill

Thank you to Keith and Debbie Travis of Tauranga Tree Co for their generous donation to the park- a grove of Cooks Pine (Araucaria columnaris). www.taurangatreeco.co.nz